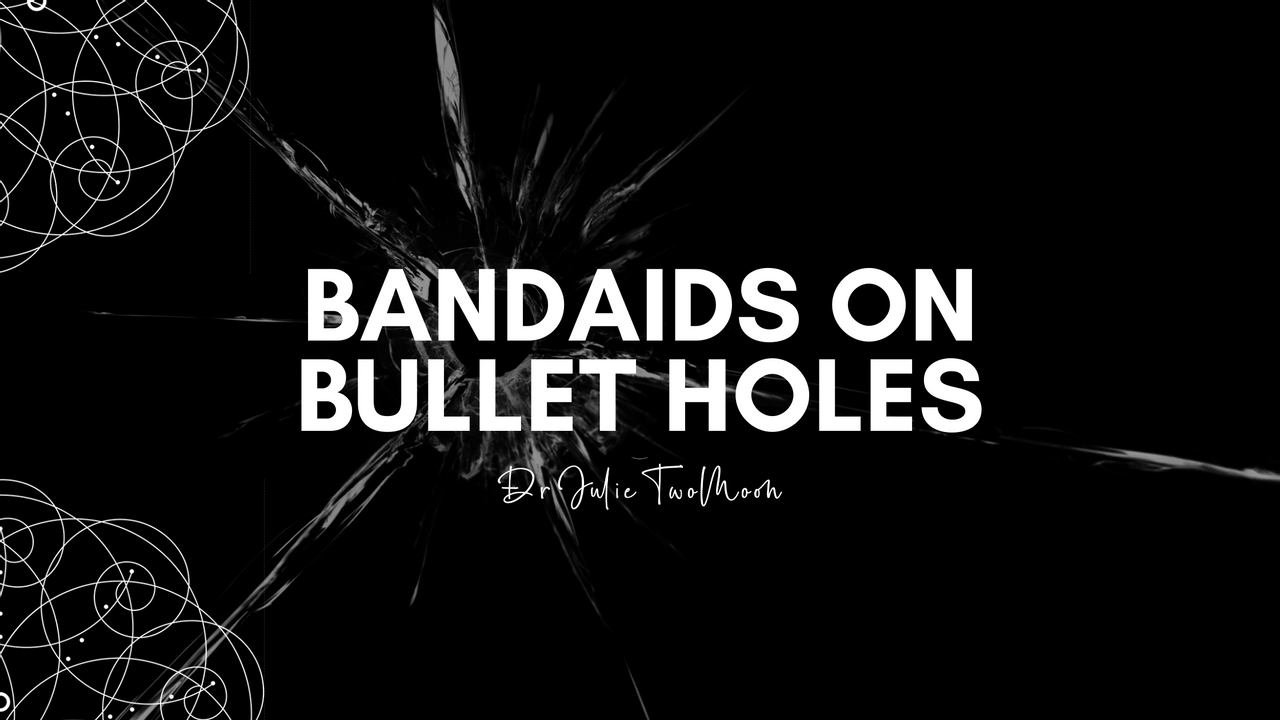 Would you ever consider putting a bandaid on a bullet hole? Now, you may be thinking….why would I ever do that?

It sounds so simple, of course not! but if you want to know the truth, this is what 90 percent of the world is doing with regards to healing. Taking a symptom-based approach to long term health and in the process, never getting to the truth, never addressing the root.

Let’s take a look at just two of the most hot button topics in healing right now...SIBO and Hypothyroidism.

SIBO (small intestine bacterial overgrowth syndrome) is the condition of name right now being ascribed as the cause of a multitude of conditions...and most commonly, docs and health practitioners are touting...if your guts not right neither is your body...fix your SIBO and watch your total health change.

Now, challenge is, that statement is 100% right...if your gut is sick, you will be too...BUT they're looking at it as a condition whereby your gut balance is disrupted, and the only way to solve it is to avoid a large number of foods AND KILL the bad bacteria while repopulating the gut with the good.

You may be thinking...what’s wrong with that?  Kill off what is getting you and fix it...right?

What if I told you that gut balance was not so much about what is growing there but the conditions which grow it...the terrain as medicine tends to call it?

What if I told you that terrain (aka your gut balance) was dictated by stress response, and stress response was a cumulative effect of life, food, emotions, spirit, and everything intertwined in those?

What if I told you that trying to kill those organisms only makes many of them run and hide...burrowing deeper into the tissues to wait until the assault is over?

What if I told you that treating this way is sure to not only bring on other digestive issues in the future but also deeper, larger more profuse health problems in other systems?

See, if you treat a condition which has its origin in chronic stress by adding stress via a KILL based philosophy, you never gain ground.  Because along with a dysfunctional gut, we know you also have low stomach acid, low bile production, low enzyme function and low immunity...also all compounded effects of chronic stress.  But that’s not all, the long term effects of that same stress have resulted in lowered hormonal function...especially Thyroid and Adrenal, inflammation in the tissues, mineral imbalances, rapid aging at the cell layer and deep cellular fatigue...none of which are even touched with a standard SIBO protocol.

Wouldn’t it make more sense to just address the stress and all of its effects at the cell layer and actually heal?

See...SIBO did not begin with the organisms…. that was a middle stage problem. It began under the effects of chronic stress and inflammation...where the cells got tired, and then couldn’t keep up with demand, and then the inflammation grew, and in that space, so did the bacteria and that led to more inflammation, which led to more symptoms and so on.

Which means that solving it is all about going back to the root and starting from there...turning off the stress response, invigorating cell energy to dispel inflammation and in the process addressing hormones, nervous system, gut, tissues, and more.

But that's not what the SIBO people will tell you because they are quite honestly stuck in a paradigm which just doesn’t work.  We cannot kill our way out of our health problems any more than we can put a bandaid on a bullet hole and expect it to heal.  I am sure you have heard the statement that every action has an equal and opposite reaction….well, let’s consider that in the KILL everything philosophy of medicine...if I destroy an area to bring about restoration...have I made the environment stronger or more resilient?...let me ask you...has it worked for farming?...have we been made healthier, have we been given stronger plants has our earth and water been made healthier with that KILL based philosophy?

NOPE and it never will be...the same is true in the body.

An apparent 90 % of the modern world has symptoms of a stressed or impaired Thyroid.

Now, medicine if working at all advocates for plugging the hole with hormones...and at first glance...it seems reasonable.  If there aren’t enough...let’s make sure there is more.  Maybe if you are seeing an alternative practitioner, they will add to that selenium, maybe kelp, perhaps a bit of vitamin D and tell you not to eat wheat.

Okay, great, except for the problem is never just the Thyroid….much like SIBO, it began as unremitting stress, low energy at the cell layer, resulting in gathering toxicity and inflammation, low nutritional status deep in the tissues and all the expanding effects of that….gut imbalances, connective tissue stress, demineralization, sleep disturbances, mood changes and more.

It progressed from chronic stress, creating cells that can't respond, creating systems that can't communicate, creating adrenals that got exhausted, creating a thyroid that gets exhausted, but also a pancreas and a pituitary and pineal gland and ovaries that are exhausted and eventually something gives.

Now, in the cases where it gets to a point of altering hormone production...you end up with an actual diagnosis of a Thyroid condition….just FYI...90% of Thyroid conditions never have an alteration in blood lab values, the dysfunction is only at the cell layer...which is actually more impactful than having low hormone production because cell layer dysfunction means that your cells see the hormones, and fail to respond.

Now, back to using Thyroid hormone...it stands no chance of helping the stress response, the cell layer, communication between systems, reducing inflammation, healing the gut or balancing other hormonal systems. Which means, eventually, you will discover that despite having supposedly “treated” the issue, you now need plans for a multitude of other systems.

So, again, let’s ponder a different truth...why not just heal the root cause and the cell layer from the beginning so that not only will the Thyroid heal, but also all the other associated impacted systems?

Why not regard it all as connected and look for where the root dysfunction really is and act on what we find from there?

I see this all the time...people tell me...it can’t be my thyroid...we treated that and now my labs are normal...or even recently, I saw a practitioner post...I healed my patients SIBO but now she has horrible acne and headaches and nothing is working…to which I wondered...why don’t they think the skin and the gut are related...what if you didn’t heal the gut you just pushed the problem into another layer?

What if the symptoms you have are system wide?

What if your body as a whole is calling out for restoration and balance?

What if hormonal issues are part of gut issues and are directly related to stress, exhaustion, rapidly aging cells, inflammation, toxicity and more and have to be addressed as such or you will likely spend the next 30 years chasing down systems one by one over and over again?

My clients learn about their cell layer and their system function and then get the chance to heal from the root and in the process address it all at once, rather than chasing it down one by one forever.  In the process, they gain strength, balance, freedom, joy, creativity, and they learn the long lost art of understanding their unique body and how to flourish forever.

If this is what you want to experience….isn’t it time to leap?

Is Adrenal Fatigue Real? How to recognize and treat your exhaustion
adrenals diet fatigue self-healing
Aug 31, 2021
Is That Half Dome
lifeforce mindset
Aug 30, 2021
Which Mineral Do I Need?
lifeforce
Aug 23, 2021
Close